On April 20, 1180 Euros were collected by the employees of the Ferrari hospital in Casarano, part of which was destined for our Educational Community.

We want to thank you for the help received, not only financial but also empathetic. Your gesture allows us to strengthen the spirit of availability and solidarity with which we try to bring help to the weakest and most needy groups.
Thanks 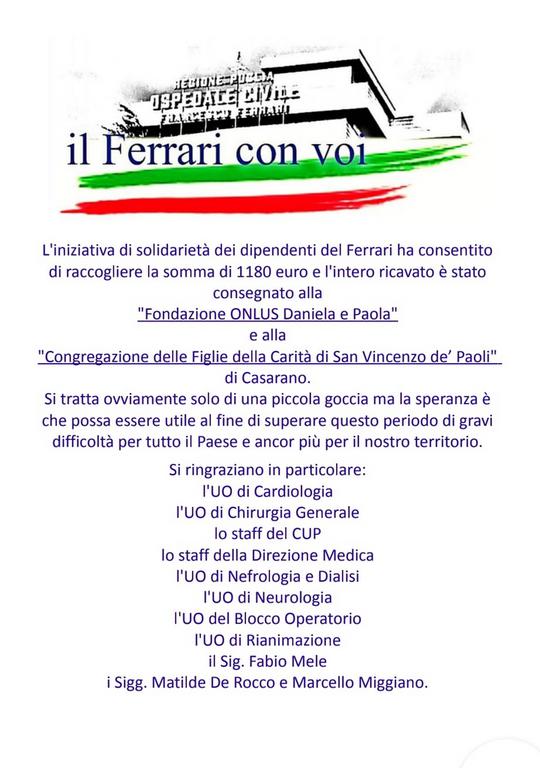 After 13 years of activity on the territory, the president gives an account of the difficulties and offers small steps to make major changes in order to improve the life prospects of children guests of the host community.

Gabriele Vizzi, in his contemporary art exhibition held in Gallipoli on 29 August 2018 in the splendid "Garibaldi" theater, wanted to dedicate a space for reflection on the discomfort that many children and young people experience today. His attention went particularly to young people and children who live separated from their families and are hosted in our educational community.

The press review of the event can be found here qui. Information on Gabriele Vizzi's project can be found on his website sul suo sito

Maestro Nagasawa, honorary citizen of the city of Casarano since 2004, is the author of the sculpture "Le Ali" dedicated to Daniela and Paola.

To read the article vai a Piazza Salento 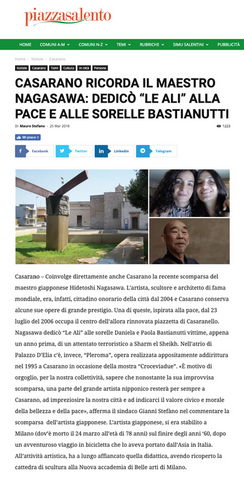 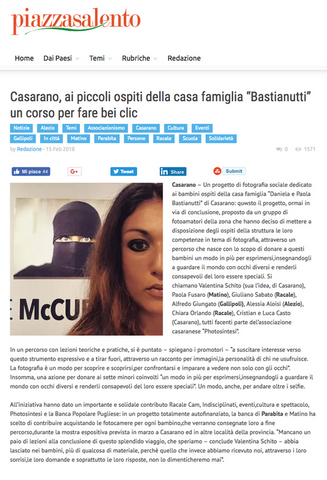 The article published in the Piazza Salento newspaper about Valentina Schito's "Scatto ergo sum" project with the young guests of the Foundation.

PresaDiretta is a prime time television program on Rai 3. The Italian victims of terrorism were remembered in the episode of 11 September 2017 with the title "ISIS target Italy".

Sabato In is a Saturday afternoon entertainment program on Rai Uno. The main theme of the episode of the March 26, 2016 was devoted to terrorism. As a guest of this episode were asked the founders of the Foundation O.N.L.U.S. Daniela and Paola, Laura and Claudio Pizzileo Bastianutti.

European Day of Victims of Terrorism - 11. March 2016 in Rossano Calabro

In the splendid Teatro Paolella in the historic center of Rossano Calabro it was held the conference on international terrorism organized by Arch. Ernesto Rapani, Coordinator of the Department of protection of victims, and by the lawyer. Straface in collaboration with Workshop for Italy and the Civil Chamber of Castrovillari. They opened the meeting the greetings of Franco Capalbo, a spokesman. Moderated masterfully and represented Patrizia Straface. Intervention on various legal, historical and sociological were kept of the lawyer. John Brandi Costaldo Salmena of San Quirico, prof. Claudio Bastianutti (father of Paola and Daniela died in the attack in Sharm el Sheik and president of the Foundation O.N.L.U.S. Daniela and Paola), prof. Delly Fabiano, the lawyer Antonella Gialdino, the arch. Ernesto Rapani, referent of the Cosenza Department Coordinator for protecting victims and Tiziana Montinari national protection of the Department Head of the Victims, who also closed the conference. At the end of the evening the exciting award ceremony of the projects participating in the contest made by the pupils of the local schools.